Between Pioneers and Indians

Utah has what might be the largest trove of folk history of all the United States. Thanks to organizations like the Sons and Daughters of Utah Pioneers, we have literally thousands of diaries and autobiographies in which the people who lived Utah’s history tell us what they saw and felt.

Few of these histories are as valuable as a Danish immigrant’s account of Utah’s Indian wars.

Not long after his marriage in 1872, Peter Gottfredson took his wife to a sawmill near Spring City to cook while he hauled logs and her brother sawed them into lumber. On September 26, Indians ambushed and killed a man and wounded his son nearby. Ten years later the editor of The Richfield Advocate asked Gottfredson “to write up the circumstances for Publication,” which he did.

Peter Gottfredson spent the next 20 years compiling a unique history of some of the darkest episodes in our past, Indian Depredations in Utah. With little education, he diligently recorded the memories of his comrades in the Utah Indian War Veterans to tell a story that would otherwise be forgotten, and which helped with their pension claims.

Depredations describes Utah’s longest and most brutal Indian conflict, the Black Hawk War that raged from 1865 to 1872. The struggle began on the day Robert E. Lee surrendered at Appomattox when Timpanogos leaders tried to settle a dispute that began when Antonguer, or Black Hawk, killed one of John Lowry’s cows. The peace conference turned violent when a drunken Lowry jerked Jake Arapeen from his horse and the Utes resolved to avenge the insult.

Brigham Young preached it was “cheaper to feed them than to fight them,” but he spent millions in church funds waging a virtually secret war that only ended when U.S. troops intervened in 1872.The war created a vortex of fear and hatred that led to greater violence and brutality on both sides. A product of its time, Indian Depredations is bitterly racist: the Utes and Paiutes are “skulking savages,” “murderous marauders,” “Mr. Redskin”  and “the sleepless foe.” But the book reports any number of white depredations that would otherwise be unknown, and like  the Iliad, the losers are often more courageous and noble than the victors.

Peter Gottfredson witnessed “the last killing of a white man by Indians during the Black Hawk uprising.” Thinking they were attacking a member of the hated Snow family, Timpanogos shot Daniel Miller, breaking his back. Dragging him from his wagon, the attackers “laid his face on a bed of cactus.” A passing friend heard his moans, and Gottfredson helped carry a litter to take the dying man home.

Miller never made it. He told his rescuers he would like to see his newborn twins before he died, and the men “asked him if he wanted us to take vengeance upon the Indians.”

Daniel Miller said, “No, they don’t know any better,” and “in a short time the poor fellow expired.”

Phillip B. Gottfredson gave historian Will Bagley the recent reprint of his great-grandfather’s classic history.

Comments by Phillip B Gottfredson a great-grandson of Peter Gottfredson.

Highly respected by noted historians as being a reliable account; to the honor of Peter Gottfredson authors, historians, researchers, journalists, scholars and academia's have cited his work in countless publications, articles, and books for decades; underscoring the importance of his time-honored account. Most recent is historian John Alton Peterson's award winning book titled Utah's Black Hawk War wherein Gottfredson's account is cited numerous times. Copies are to be found in the New York Public Library, other major collections and our on-line bookstore. Being a product of the time the book Indian Depredations in Utah is a testament to the proclivity of early Mormon pioneers, and the extreme circumstances under which the Native Indian were subjected.

The book is a collection of firsthand accounts that Peter gathered and compiled over a 20 year period. Little of the book is in Peter's own words, and is why the book is racist in content as Bagley states, it is "a product of it's time." Peter was a journalist and it was his intent to accurately portray the mindset of the people, and what better way than to get them to write their stories in their own words.

By the time the Mormon War with the Timpanogos Nation had started in 1865, Timpanogos leaders Chief Black Hawk and Chief Tabiona would become friends of Peter as he spent much of his time in the Indian camps. He speaks of helping them gather food, playing with the children, and socializing.

However, Peter deliberately down-plays his close relationship with the Timpanogos, and for good reason. There is more implication to this than meets the eye. Mormon Church prophet Brigham Young was adamantly against members having personal relationships with the Indians. Brigham said; "If the inhabitants of this Territory, my brethren, had never condescended to reduce themselves to the practices of the Indians, (as few of them have,) to their low, degraded condition, and in some cases even lower, there never would have been any trouble between us and our red neighbors."

I spent several years trying to understand why Peter and his brother Hans would ignore the stern warnings of Brigham Young not to socialize with the Timpanogos. For if the Timpanogos were so "degraded," "savage" and "loathsome" as they are all too often described in historical accounts, it just didn't make sense to me why Peter and his brother would spend years living among them. Our own family history of Peter clearly portrays him as a man of great character. Elders within in our family who knew him personally recall Peter as being a kind old gentleman. My father who lived with Peter in his home spoke of him with the greatest respect and love. Then in 2005 a distant cousin Briant Jensen gave me a copy of Peter's 500 page autobiography, and upon reading his personal account I could only conclude that Peter was as the family knew him, a rugged but kind man, who had a great compassion for people from all walks of life.

I too have spent a lot of time living among the Indian people, I wanted to get a better sense of what Peter's experience was, and at the same time felt that I was in some way honoring that friendship that Peter had with the Timpanogos. Because of this I finally understand why Peter admired them as he did. My personal experience among the Indian people has been extraordinary and forever changed my fundamental beliefs. I can easily conclude that for Peter it would have been impossible for him not have been influenced by their culture. He couldn't help but witness firsthand the exploitation and agony of the Timpanogos, and compassionately sympathizing with them.

Within this context, Indian Depredations in Utah by Peter Gottfredson, being a product of the time as Mr. Bagley has stated, it is also the product of a man who lived in a violent, and often an unjust world. (See Peter's autobiography)

Great-granddad's book is a classic, and one you will enjoy reading. 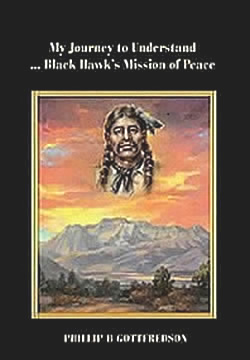